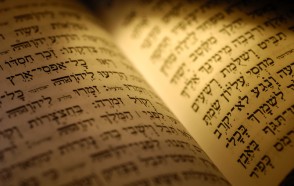 Following the Ashkenazi tradition, this week’s Haftarah reading is Isaiah 27:6 – 28:13 and 29:22-23. The reading from Isaiah is encircled with the prophetic understanding that Jacob/Israel will, as in times past, be restored to a place of life and blessing, dwelling in the presence of ADONAI, thereby fulfilling the LORD’s promise to to Abraham in Lech Lecha, “I will make of you a great nation, and I will bless you and make your name great, so that you will be a blessing. … and in you all the families of the earth shall be blessed,” (Gen. 12:2-3). The passage begins, “In days to come Jacob shall take root, Israel shall blossom and put forth shoots and fill the whole world with fruit,” (Isaiah 27:6). Then it ends with, “Therefore, thus says the LORD, who redeemed Abraham, concerning the house of Jacob: “Jacob shall no more be ashamed, no more shall his face grow pale. For when he sees his children, the work of my hands, in his midst, they will sanctify My Name; they will sanctify the Holy One of Jacob and will stand in awe of the God of Israel,” (Isaiah 29:22-23).

Just as in the past, as ADONAI brought Israel out of Egypt and planted her in the land of Canaan, to flourish and grow, Isaiah sees a future date when He will once again gather all of Israel from all the lands of dispersion, and Jacob will never more be ashamed because Israel will sanctify the Name of the LORD, as originally intended.

True to the narrative however, there is an uncomfortable period between the beginning and the ending of the passage describing Israel’s punishment from the hand of the LORD. However, the discipline or punishment was experienced was metered according to the transgression. Along with the discipline was the assurance that the discipline would not be totally destructive as was the LORD’s dealings with the surrounding nations – those that He used to discipline Israel.

Has he struck them (Israel) as He struck those who struck them? Or have they been slain as their slayers were slain? Measure by measure, by exile you contended with them… Isaiah 27:7-8a

Interestingly, R. Hirch notes that “ancient Egypt, Assyria, and Babylonia are all extinct, you, the Jewish people, thrive.”[i] Israel, the historic seed of Abraham, Isaac and Jacob, continues to this day, not because of any innate or intrinsic goodness or righteousness; but because of ADONAI and His faithfulness to His covenant with the Patriarchs, with Moshe and the children of Israel at Sinai, and with King David. The prophet Malachi records, “For I am ADONAI, I do not change, so you, children of Jacob are not consumed,” (Malachi 3:6).

Because the LORD does not change, His promises, to Israel do not change. This means, when Israel is disobedient, she will get punished; history has proven this time and time again. But the punishment does not signify rejection, just the opposite. Throughout the scriptures, the discipline of the LORD guarantees a covenantal, loving relationship with ADONAI:

The Torah: Know then in your heart that, as a man disciplines his son, the LORD your God disciplines you. (Deuteronomy 8:5)

The Prophets: I will be to him a father, and he shall be to Me a son. When he commits iniquity, I will discipline him with the rod of men, with the stripes of the sons of men, but My steadfast love will not depart from him, (2 Samuel 7:14-15)

The Writings: Blessed is the man whom You discipline, O LORD, and whom You teach out of Your Torah, …for the LORD will not forsake His people; will not abandon His heritage; (Psalm 94:12 & 14)

The Apostolic Writings: For the Lord disciplines the one he loves, and chastises every son whom he receives. It is for discipline that you have to endure. God is treating you as sons. (Hebrews 12:6-7a)

For the moment all discipline seems painful rather than pleasant, but later it yields the peaceful fruit of righteousness to those who have been trained by it. (Hebrews 12:11)

And lastly, as stated earlier, the discipline is not because of His wrath but His love for us:

My son, do not despise the LORD’s discipline or be weary of his reproof, for the LORD reproves him whom he loves, as a father the son in whom he delights. (Proverbs 3:11-12)

Our condition or situation often seems bad, actually, at times, it is quite bad – from our perspective. But we do not see the entire picture, the full tapestry that the LORD is weaving with the pieces and phases of our lives – motivated as it were by the understanding that Jeremiah shared, “For I know the plans I have for you, declares the LORD, plans for welfare and not for evil, to give you a future and a hope,” (Jeremiah 29:11). Therefore, wherever you find yourself this Shabbat, especially if it seems to be in the midst of disciple or correction, or maybe walking out the consequences of past choices – know that the LORD does have a plan for your life, just as He has always had for Israel. And He will accomplish what He has started in your life, (Philippians 1:6).