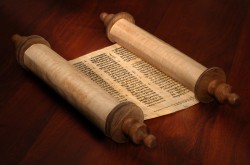 This week’s Parsha is Toldot, Genesis 25.19 – 28.9.[i] It continues the narrative of the people whom ADONAI choose to call out from Mesopotamia and idolatry, and to set apart for Himself as His am segula a “treasured people” (Deuteronomy 7.6). He did not set apart Abraham’s family (am Israel) to Himself because they were so righteous, but rather because they walked in obedience to His revelation, although they stumbled at times. This week we see a number of similarities between the father Abraham and the son Isaac. Like Abraham’s wife, Isaac’s wife was barren until the LORD answered Isaac’s prayers on her behalf (Genesis 25.21). Also, like Abraham, Isaac had two sons, one through whom the promises would continue, Jacob; and one who would venture out on his own, Esau. And like Ishmael, at times Esau and his descendants would be at peace with Jacob, but more often than not, there was anything but peace.

Continuing the similarities, like Abraham there was a famine in the land and Isaac first thought to go down to Egypt, but instead sought the assistance of Abimelech in Gerar. This is the same name as the man Abraham encountered but not the same person. Because of Isaac’s obedience not to seek assistance in Egypt, the LORD reaffirmed His covenant of blessing with Isaac.

It has been suggested that the use of the plural lands instead of land, indicates that Isaac was promised not only Canaan but all of the Canaanites tribal holdings and city-states.[ii] Sadly, it is here that the story takes a downward twist, as Isaac, despite the assurances from ADONAI, emulates his father (Genesis 20) and tells the men of Gerar, that Rebekah was his sister, not his wife. Just as with Abraham, the LORD speaks to Abimelech protecting him from committing adultery with Rebekah, and as with Abraham, he allows Isaac to dwell in Gerar where Isaac becomes more prosperous. Even in Isaac’s fear and doubt, the LORD turned the situation into a blessing for Isaac. There are consequences for our choices in life. Although Abimelech allowed Isaac to “dwell among them” he was never truly accepted (Genesis 26.14-22). In the end, ADONAI appeared to Isaac in a dream in which He reaffirmed His promises, “I am the God of your father Abraham. Do not be afraid, for I am with you, and I will bless you and multiply your seed for the sake of Abraham my servant” (Genesis 26.24). After this Isaac worshipped ADONAI and Abimelech acknowledged the LORD’s hand on Isaac and backed off (Genesis 26.28-29). This truly exemplifies Rav Shaul’s affirmation to the believers at Rome, “Now we know that all things work together for good for those who love God, who are called according to His purpose,” (Romans 8.28). Things don’t always go the way we want or expect, and sometimes we may have to dig and re-dig a some wells. But in the end,

…the word of ADONAI is upright and all His work is done in faithfulness. (Psalm 33.4)

and through the prophet Isaiah the LORD affirmed,

“My word will be that goes out from My mouth. It will not return to Me in vain, but will accomplish what I intend, and will succeed in what I sent it for” (Isaiah 55.11).

The Haftarah is from Malachi 1.1 – 2.7, which contains assurances of the LORD’s love for Jacob and his descendants, as well as promises of discipline for breaches of covenant, whether by deed or attitude. Just as Isaac discovered, the LORD is faithful to perform His promises. Note, however that one of those promises is the punishment of transgression and disobedience. The author of the book of Hebrews states this plainly,

“Have you forgotten the warning addressed to you as sons? ‘My son, do not take lightly the discipline of ADONAI or lose heart when you are corrected by Him, because ADONAI disciplines the one He loves and punishes every son He accepts’.” (Hebrews 12.5-6; cf. Proverbs 3.11-12)

ADONAI loves us with an everlasting love. But He will not allow us to remain in disobedience. This includes those things that we are sure no one else sees or is aware of. He loves us and will discipline us because of that love, even while we dig another well.