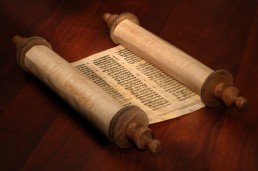 This week’s Parasha is Shoftim, and is found in Deuteronomy 16.18 – 21.9.[i] The very beginning of this parasha links justice with the avoidance of idolatry (16.18-22). Later in the Parasha, there is a passage that is most troubling for modern sensibilities – “from the cities of these peoples, which ADONAI your God is giving you as an inheritance, you must not let anything that breathes live. You must utterly destroy them—the Hittites, the Amorites, the Canaanites, the Perizzites, the Hivites and the Jebusites—just as ADONAI your God has commanded you” (20.16-17). Left by itself, this would seem quite harsh at best, and downright barbaric at worst. How could a gracious, loving God (cf. Exodus 34.6-7) possibly call for the total annihilation of not one, but six indigenous people groups, especially since Bnei Yisrael was not any more righteous, or numerous, or particularly special than any other nation. However, Bnei Yisrael was chosen and set apart by the Holy One because of a promise to the patriarchs, Abraham, Isaac and Jacob concerning the land of Israel. Furthermore, the judgment on these six nations was for their sins against the Creator. Rav Shaul, commented on Hashem’s judgment when he wrote

For the wrath of God is revealed from heaven against all ungodliness and unrighteousness of men. In unrighteousness they suppress the truth, because what can be known about God is plain to them—for God has shown it to them. His invisible attributes—His eternal power and His divine nature—have been clearly seen ever since the creation of the world, being understood through the things that have been made. So, people are without excuse — for even though they knew God, they did not glorify Him as God or give Him thanks. Instead, their thinking became futile, and their senseless hearts were made dark. Claiming to be wise, they became fools. They exchanged the glory of the immortal God for an image in the form of mortal man and birds and four-footed beasts and creeping things. (Romans 1.18-23)

But there was also a third reason for the destruction of these six nations, the protection of Israel from learning the idolatrous practices of these nations, and walking after them instead of walking after the LORD and His commandments.

You are to do this so they will not teach you to do all the abominations as they have done for their gods, and so you would sin against ADONAI your God. (20.18)

It has always been the LORD’s desire for His people to walk in holiness before and with Him. Cephas reminded us of this as he wrote to his community, “…just like the Holy One who called you, be holy yourselves also in everything you do. For it is written, ‘Kedoshim (holy) you shall be, for I am kadosh (holy)’” (I Peter 1.15-16; cf. Leviticus 19.2). If we associate ourselves with the idols and practices of those which the LORD calls abominations, we de facto become abominations ourselves, not holy as He desires.

Israel did not always walk in the holiness required by Hashem and the result has been numerous exiles and judgment. However, due to His promises to the patriarchs and to Bnei Yisrael herself, Israel was not to be totally destroyed as the six mentioned nations. In this week’s Haftarah, Isaiah 51.12 – 52.12, which represents the fourth Shabbat of Consolation, the LORD reminds Israel that even though He is the one who brought the instruments of judgment upon Israel. It is He alone that restores and comforts her as well. He states emphatically, “I, I am the One who comforts you” (Isaiah 51.12). Just as the LORD led Bnei Yisrael out of Egypt “with a mighty hand and an outstretched arm, with great terror, and with signs and wonders” (Deuteronomy 26.8) so He “has bared His holy arm before the eyes of all the nations. All the ends of the earth will see the salvation of our God” (Isaiah 52.10).

There are a number of passages from the Apostolic Writings which tie directly into Shoftim. In Deuteronomy 19.15 we read, “A single witness shall not rise up against a person for any offense or sin that he commits. By the word of two or three witnesses is a case to be established.” First, Yeshua echoes these words when He taught,

Now if your brother sins against you, go and show him his fault while you’re with him alone. If he listens to you, you have won your brother. But if he does not listen, take with you one or two more, so that ‘by the mouth of two or three witnesses every word may stand.’ But if he refuses to listen to them, tell it to Messiah’s community. And if he refuses to listen even to Messiah’s community, let him be to you as a pagan and a tax collector. (Matthew 18.15-17)

The principle is sound. First attempt to be reconciled with a brother (or sister) one-on-one; this is the most optimum solution. If that doesn’t work, go with one or two others in obedience to the injunction in Deuteronomy. While not as good as one-on-one, it is still beneficial if it works. If this doesn’t work, then bring the issue before the community. It he or she still will not be reconciled, then separate them from the community. But such separation, like the discipline Israel had to endure, is for the purpose of restoration.

There is a second passage that bares looking at as well. In 1 Timothy, Rav Shaul exhorts Timothy

Do not accept an accusation against an elder except on the evidence of two or three witnesses. Correct those who continue sinning in the presence of everyone, so that the rest also may fear. (5.19-20)

Remember Miriam and Aaron’s offence against Moshe (Numbers 12.1-15). This was a public offence and the punishment was public – nothing was swept under the rug. For Timothy, as well as us today, when an elder or another in authority transgresses, they must be held responsible but only if there are two or three that can give proper evidence. Then, according to Yeshua’s direction, if the individual repents he or she should be restored. If not, they are to be corrected, by the proper authorities, as Miriam was, so that others will not repeat the infraction. Therefore, the optimum purpose of discipline, whether upon Israel or the Body of Messiah, is to bring about correction and restoration. Sadly, there are times, when discipline, instead of restoration brings about destruction.

Every day, as we pray the Aleinu,[ii] we ask that idolatry will be brought to an end, the kingship of Hashem be recognized and established in all the earth. According to Rav Shaul, that kingdom has already been established and will continue through Yeshua, our Messiah and Lord,

For this reason, God highly exalted Him and gave Him the name that is above every name, that at the name of Yeshua every knee should bow, in heaven and on the earth and under the earth, and every tongue profess that Yeshua the Messiah is Lord — to the glory of God the Father. (Philippians 2.9-11)

[i] Unless otherwise noted, Scriptures are from the Tree of Life (TLV) Translation of the Bible. Copyright © 2015 by The Messianic Jewish Family Bible Society.

[ii] The Aleinu is a relatively short prayer that marks the end of all three daily prayer services that acknowledges Hashem’s rule and authority not only upon Israel but eventually upon all humankind http://www.myjewishlearning.com/article/aleinu/