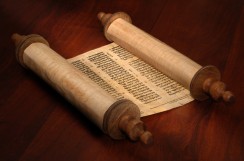 A little over eight weeks ago we commemorated the destruction of both Temples, Israel’s exile among the nations, and various other atrocities perpetrated upon and suffered by the Jewish people over the centuries. This was followed by the Seven Weeks of Consolation which reaffirmed ADONAI’s love, care, and concern for His people, assuring them that no matter how far afield they were scattered, they remained His am segula, and He would return them to both Himself and their ancestral land. This evening (Wednesday) begins the Days of Awe, with the two-day observance of Rosh Hashana or Yom Teruah (the Day of the Blowing of the Shofar). Traditionally at this time, we remember the creation of mankind as the living soul who had the power and ability to acknowledge Hashem as Creator and King of the Universe. In that position, we also acknowledge Hashem’s right to judge the thoughts of our hearts, the words of our mouths, and the deeds of our hands – not only as they are in relation to Him, but also as they are in relation to our fellow man. Within traditional Judaism it is understood that at this time the ledgers are inscribed and read by the heavenly tribunal, and we, as subjects of Hashem, have the opportunity to repent and make restitution for the wrongs accomplished. Granted, as believers in Yeshua our iniquity has been dealt with, but we still need to deal with the results of said iniquity, especially as it relates to our fellowman (cf. Matthew 5.23-24).

Between Rosh Hashana and Yom Kippur lies Shabbat Shuvah, and Parashat Ha’azinu (Deuteronomy 32.1-52).[a] It begins with what is known as the Song of Moshe (Deuteronomy 32.1-43), which encapsulates Israel’s somewhat turbulent history to date. It conveys the understanding that the turbulence is not yet over, but that eventually the LORD will be victorious and His people will truly be His am segula for all eternity.  At the end of the song, Moshe charges the people once more

“Put in your hearts all the words that I call as witness against you today—that you may command your children to keep and do all the words of this Torah. For it is not an empty thing for you, because it is your life! By this word you will prolong your days on the land, which you are crossing over the Jordan to possess.” (32.45-47)

The words of the Torah are your life! He implores the people to understand and grasp this reality, knowing that they won’t for at many more centuries.

Kohlenberger and Mounce Hebrew Lexicon translates shuvah (שובה) as to turn back, turn to, or return, and is the same root as repent.[b] During this time between Rosh Hashana where iniquity and shortcomings are recorded and judged, and Yom Kippur where forgiveness is either sealed or denied depending upon one’s attitude and actions, the Rabbis placed the reading of this impassioned plea from the prophet

Return O Israel, to ADONAI your God, for you have stumbled in your iniquity. Take words with you and return to ADONAI. Say to Him: “Take away all iniquity, and accept what is good, so we may repay with offerings of our lips… “I will heal their backsliding, I will love them freely, for My anger will turn away from him. (Hosea 14.2-3, 5)

Just as Moshe pleaded time and time again with Israel to choose life not death, Hosea pleads with Israel once again to choose life by returning to ADONAI. The words of Hashem, “I will love them freely…” should bring both immense joy as well as deep sorrow to our hearts. Joy because He is our LORD and He desires only our good, even when He must chastise us. But then there is sorrow, because like a Father, His love for each of us knows no bounds, no limits and still we fail to follow Him with our whole heart – often choosing our own way instead of His. But then there are the words from the prophet Micah,

Who is a God like You pardoning iniquity, overlooking transgression, for the remnant of His heritage? He will not retain His anger forever, because He delights in mercy. He will again have compassion on us. He will subdue our iniquities, and You will cast all our sins into the depths of the sea. You will extend truth to Jacob, mercy to Abraham, that You swore to our ancestors from the days of old. (Micah 7.18-20)

Our restitution and redemption, while dependent in part to our returning to ADONAI, is primarily based upon His love, His grace, and His character. As we have and will continue to recite many times of the next ten days

Adonai, Adonai, the compassionate and gracious God, slow to anger, and abundant in lovingkindness and truth, showing mercy to a thousand generations, forgiving iniquity and transgression and sin, yet by no means leaving the guilty unpunished, but bringing the iniquity of the fathers upon the children, and upon the children’s children, to the third and fourth generation. (Exodus 34.6-7)

Were it not for the grace and character of Hashem, we would have all perished in the wilderness – whether it is the desert and desolation of the world or the habitation of our own making. It was and remains His love that keeps us under the shelter of His wings. In Deuteronomy, Moshe reminded Israel that it was not because of their great number or mighty prowess that they were chosen (7.7-9). Equally Yeshua reminded His followers, as well as us today, that we did not choose Him, but He chose us, “You did not choose Me, but I chose you. I selected you so that you would go and produce fruit, and your fruit would remain…” (John 15.16). Our choice then, just like Israel’s, is to accept Yeshua’s choosing of us and to walk in His ways. During these Days of Awe, we should reflect on where we are in this journey and what we need to do, not to earn our place but to please Him who has called us to this place.

[a] Unless otherwise noted, Scriptures are from the Tree of Life (TLV) translation of the Bible. Copyright © 2015 by The Messianic Jewish Family Bible Society.