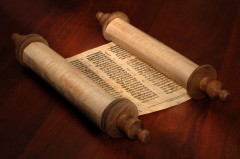 The last reading from the book of Numbers is the double portion, Matot-Massei, Numbers 30:2-36:13.[i] The haftarah, Jeremiah 2:4-28 and 4:1-2, is the second of a series of three “haftarot of affliction” leading to Tisha b’Av, the annual commemoration of the destruction of both Temples as well as other atrocities suffered by the Jews throughout the centuries. The reading from the Apostolic Writings is Acts 9:1-22 according to the Flame Foundation’s schedule prepared by Dr. Jeffrey Feinberg.

Larry Perry in his blog Ethics for Success stated, “I like one of the definitions in Webster’s Dictionary for the word “bond.” It states that “bond” is a “duty or obligation imposed by a contract, promise, etc.” I have faint memory of when a man’s word was his commitment and promise and was worthy of honor. Today, words are cheap! Men use words today in business, politics, and the biased media to manipulate the thinking of others to accomplish their agendas.”[ii]

With the idea of the importance of a man’s word, this week’s double portion begins, “Whenever a man makes a vow to Adonai or swears an oath to obligate himself by a pledge, he is not to violate his word but do everything coming out of his mouth” (Numbers 30:2). A few weeks ago, the haftarah recorded Jephthah’s vow to ADONAI, as he attempted to secure divine covering over an upcoming battle (Judges 11:30-31). Though victorious, Jephthah’s vow came back to haunt him as the first thing out of his house was his daughter, his only child, (Judges 11:34-35).

The author of Kohelet (Ecclesiastes) offers these words of advice

Do not be quick with your mouth nor hasty in your heart to utter a word in God’s presence. For God is in heaven, and you are on the earth—therefore, let your words be few. As a dream comes with excessive burdens so a fool’s voice with too many words. When you swear a vow to God, don’t delay in fulfilling it. For He takes no delight in fools. Pay what you vow! It is better for you not to vow than to vow and not pay. (Ecclesiastes 5:1-4)

Yeshua continued this line of thought when He taught His followers,

“Again, you have heard that it was said to those of old, ‘You shall not swear falsely, but shall carry out your oaths to Adonai.’ But I tell you, do not swear at all—not by heaven, for it is the throne of God; or by the earth, for it is the footstool of His feet; or by Jerusalem, for it is the city of the Great King. And do not swear by your head, for you cannot make a single hair white or black. But let your word ‘Yes’ be ‘Yes’ and your ‘No,’ ‘No’—anything more than this is from the evil one.” (Matthew 5:33-37; cf. James 5:12)

Why are the words of our mouths so important? It is said that man is the only creature that most intimately mimics HaShem in that his words have the power to build up or to tear down, to bring life or to cause death. The author of Mishlei reminds us, “Death and life are in the control of the tongue” (Proverbs 18:21), while James warns us,

For every species of beasts and birds, reptiles and sea creatures, is tamed and has been tamed by mankind. But no human being can tame the tongue. It is a restless evil, full of deadly poison. With it we bless our Adonai and Father, and with it we curse people, who are made in the image of God. From the same mouth comes blessing and cursing. My brothers and sisters, these things should not be. (James 3:7-10)

In today’s world, as Perry noted above, words are often used to manipulate people and situations according to the agenda of the speakers. As Yeshua believers, we should not allow ourselves to follow this pattern. Life and blessing are ours to dispense, if we pay attention to the words we speak, as well as the attitude of our hearts when we speak. In closing, here is a Chasidic folktale that epitomizes the power of our words.

Once there was a young fellow who went about town slandered the local rabbi. One day, for whatever the reason, he realized he was wrong and went to the rabbi’s home and asked for forgiveness. The rabbi, realizing that the young man had not realized the full extent of his transgression, told him that he would forgive him on one condition: that he go home, take a feather pillow from his house, cut it up, and scatter the feathers to the wind. After he had done so, he should then return to the rabbi’s house.

Though puzzled by this strange request, the young man was happy to be let off with so easy a reparation. He quickly cut up the pillow, scattered the feathers, and returned to the house.

“Am I now forgiven?” he asked.

“Just one more thing,” the rabbi said. “Go now and gather up all the feathers, each and every one.”

“But that’s impossible. The wind has already scattered them.”

“Precisely,” he answered. “And though you may truly wish to correct the evil you have done, it is as impossible to repair the damage done by your words as it is to recover the feathers. Your words are out there in the marketplace, spreading hate, even as we speak.”

Whether speaking to the LORD or to one another remember Rav Shaul’s exhortation, “Let your speech always be with grace, seasoned with salt, to know how you ought to answer everyone.” (Colossians 4:6)